A conversation with myself

“I mean I’ve been checking the site every week, but that little piece on ‘Silver Linings Playbook’ is still on top. What’s been up?”

“Oh there was a trombone quartet I wrote for my sister for Christmas. And then I wrote this music for a production of Sarah Ruhl’s play “In The Next Room” at Princeton University.”

“Hmm. That’s cool. But you really didn’t have time to blog at all?”

“Well I was in middle of grad school interviews, which  were a bit crazy. A lot of time on Megabus I’ll say.”

“But Megabus has internet access! You could’ve written at least something on those long bus rides.”

“Okay okay okay. I get it. You wish I had written something in the last 3 months. And I get that you think my excuses were lame. But I swear my real excuse is quite good.”

“Yeah. I haven’t been able to stop listening to this new album by drummer/composer John Hollenbeck with the Frankfurt Radio Big Band and vocalists Theo Bleckmann and Kate McGarry and keyboard meister Gary Versace. Like I haven’t been so bowled over by album in over a year I think. Like since Donnacha Dennehy’s american label debut with that Dawn Upshaw song cycle, or tUnE-yArDs.”

“Oh really? It’s so good that you haven’t been able to do anything else?”

“Well outside of teaching beginning drum and piano lessons, all I’ve been doing is listening to that album. It hasn’t left my car in almost two months. For someone who gets bored with music pretty quickly, this is kind of nuts.”

“But what’s so good about it anyway? Who is this John Hollenbeck character anyway?”

“I mean he’s only like the coolest composer writing for large ensembles consisting of 5 woodwinds, 4 trombones, 4 trumpets, and a rhythm section.”

“Better than Darcy James Argue? You talk about him like a ton.”

“Well Darcy James Argue writes for 5 trumpets and no mallet percussion, so he’s like in a whole other category.”

“Anyway, Hollenbeck has this really cool compositional style where a lot of sounds from the past 50 years of both jazz and classical music get incorporated in this super groovy and organic way. Like Hollenbeck studied jazz composition with Bob Brookmeyer, who’s like the grandfather of modern large ensemble music, but he also really knows his minimalism and likes to do these hocketing things where the trombones sound like they’re bubbling up from a volcano.”

“Yeah it is! And you’d like his sense of groove. He’s able to make everything feel so infectious and funky without it sounding like a particular genre.”

“Hmm. Interesting. He better not be one of those atonal guys you keep pushing on me and I still can’t get.”

“Well Hollenbeck uses all kinds of harmonies. And I think you’d even like his atonal stuff because of those grooves. But on this new album, you don’t need to worry about running into excess atonality because most of the tracks are covers of pop songs, actually.”

“Oh not another one of those jazz guys trying to be cool by covering Radiohead or Sufjan Stevens.”

“Well I can’t say the songs he picked are really associated with contemporary attitudes of being cool. He’s got not one but two songs by Jimmy Webb, which is so our parents’ vibe (the songs were performed by the likes of Glen Campbell and Judy Collins if that helps you get the picture). Then there’s this traditional American tune that most people know from ‘O Brother Where Art Thou and Queen’s ‘Bicycle Race,’ which are hardly attempts to win the Brooklyn crowd. The only vaguely ‘cool’ song on the record is Imogen Heap’s ‘Canvas’ and it’s not like her biggest hit or anything.”

“Yeah. He seemed to pick the tunes for their intrinsic musicality, not pop culture associations. I have to say that all of the melodies have these amazingly strong personalities to them. Even when taken out of their traditional genre garb, you know exactly what the song is and why it’s a good song.”

“It really is. I still can’t believe how I can hear raiments of so many styles of music in the pieces and yet they all adhere as single statements of a singular musical personality.”

“Well let’s take a look at his version of ‘I’m a Man of Constant Sorrow,’ that American old time tune. So the tune is based in traditional folk music because of the nature of the melody. But right as the tempo kicks in after this monstrous bulldozer of an opening, Hollenbeck brings in a strong jazz undercurrent to the groove. He’s been on record talking about how this one Pat Metheny track with Jack DeJohnnette on drums has really affected his sense of groove, and here is where that influence comes through big time – it even has the trademark Metheny downstrum! Then the whole thing gets super awesomely greasy,  like old-school Stax meets pyrotechnic jam band, as dueling tenor sax solos kick in over Gary Versace’s B3 organ. And of course those crazy interlocking, kinda-Reichian trombone hockets come roaring in like “Sing Sing Sing” on steroids. In the tune, Hollenbeck is speaking three distinct American musical languages at the same time. It’s like this perfect pinnacle of Americana that doesn’t leave any bit of musical history out.”

“Yeah. I told you there was much to obsess over.”

“But is everything so hard-driving? I don’t think I can handle another eleven and a half minutes of that much intensity.”

“Well let’s head back a track to ‘The Moon’s a Harsh Mistress.'”

“Oh I think I know that tune. Doesn’t one of the a capella groups at school sing it?”

“Why would this Hollenbeck fellow want to cover such a hokie tune?”

“That was my thought exactly when I saw it on the album sleeve. It’s so perfectly melodic and velvety that I find it extremely cloying in its a capella form. I had no idea what drew him to the tune. In some ways, I still don’t know why he picked it.”

“So the track’s not very good then?”

“Yeah. And keeps perfect fidelity to the tune. But Hollenbeck’s such a good craftsman and creative spirit that he finds ways of giving the song a symphonic scope without being over-the-top.”

“Yeah. For me, it starts with the opening chords, played completely unadorned on piano. I’ve transcribed them here so you can see how they work. They’re literally perfect.” 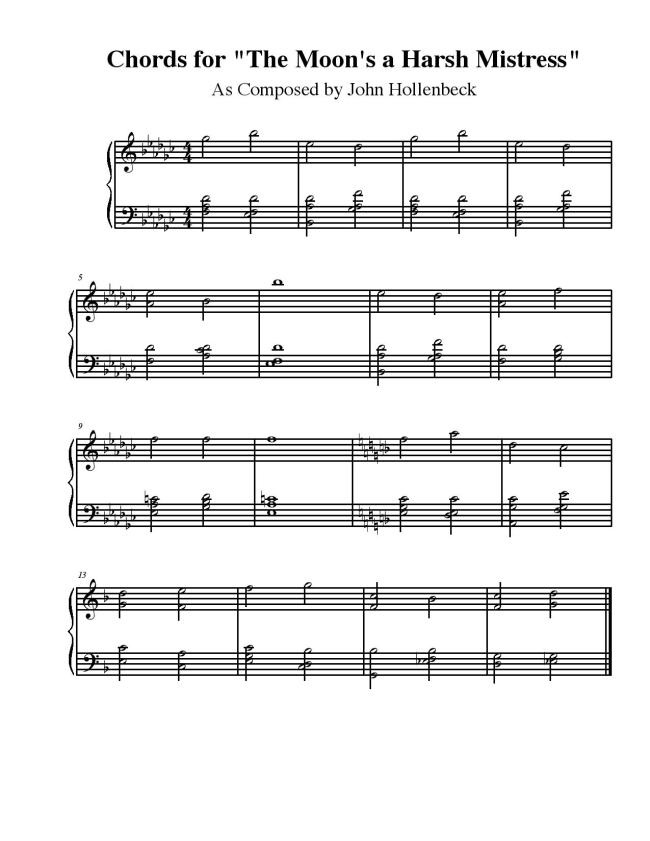 “So why are they so perfect?”

“Well writing tonal music can be so tough because the western tonal system has been around for so long. It’s almost impossible to come up with a diatonic chord progression that doesn’t sound like a cliche. And somehow Hollenbeck did it. As you can see, the top line melody strongly suggests a Gb major tonality. But instead of using stock chords below the melody, Hollenbeck uses unusual root movement and leaves out thirds and puts in really dissonant intervals. There’s a minor 9th on the first chord for crying out loud! Usually minor 9ths sound like fingers on a chalkboard, not lush and beautiful and colorful. And then how he modulates around the F natural in the melody! It’s just stunning.”

“Okay, okay. These chords are cool. But they only last a minute and the piece is over 14. What happens for the rest of it?”

“Well Hollenbeck knows he has a good idea on his hands with these chords. They become the chord progression to the actual tune and the backbone on which all of the instrumental pyrotechnics that ensure rest on. That velvety and cloying melody we know gets new life when strung around these pungent and surprising chords. The harmonies are warm and inviting, yet unstable without their traditional combinations of thirds and fifths. They’re like the moon itself – seemingly warm and beautiful on the outside, but in reality a mercurial heart-breaker that can leave for new destinations unexpectedly. Hollenbeck shows what it means to be a really, really good composer here – you find one really good idea and explore all its mysteries.”

“Wow. I think you sold me on this. I gotta check this record out.”

“Sweet man. It’s such a killer. The playing of the Frankfurt Radio Big Band is impeccable and for me, Theo Bleckmann and Kate McGarry are the standout jazz vocalists of today’s scene, combining musical precision with an uncanny ability to strike at the heart of a lyric. And while Hollenbeck doesn’t lead from the kit on this record, you do get to hear him solo on a bicycle.”

“And it sounds like you have your record of the year prize all sized up.”

“Quite possibly. But I won’t speak to soon because the other preeminent composers for large ensembles consisting of 5 woodwinds, 4 trombones, 4 or 5 trumpets, and rhythm section have albums coming out this spring. I just picked up Maria Schneider’s ‘Winter Morning Walks’ and am excited to dive into it. She’s working with a chamber orchestra this time and the impeccable soprano Dawn Upshaw, so I’m very curious to hear how her style translates to strings. And then of course that aforementioned Darcy James Argue has his “Brooklyn Babylon” project set for release next month.”

“Well keep me updated about how those ones are, will ya?”

“I think I can make time for them.”

“It’s nice to be back. Now what terrible jazz internet trollings have I missed?”

“Someone said something about Wayne Shorter.”

“Guess I didn’t miss much.”